Florida’s springs have long been my favorite feature of this state. In the late 1800s and early 1900s tourists flocked to Florida, not to vacation on its beaches, but to bask in the state’s pristine springs. Unfortunately, Florida’s delicate ecosystem has been overwhelmed by the exponential growth of its human population, and the state’s springs are threatened. Water flow from many has decreased over the years, while others, such as the original High Springs, have essentially stopped flowing altogether.

There is a small community in north Florida called Worthington Springs, a sleepy community roughly twenty miles north of Gainesville, just north of the Santa Fe River, with a population just under two-hundred. There’s not much there, and unless you live there or have friends or family in Worthington Spring, you would doubtless have little reason to check it out. 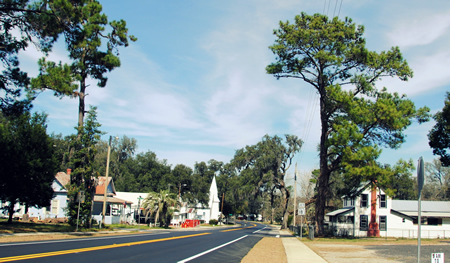 Yet at one time this tiny town had a thriving tourism business centered around the spring which gave the community its name. The spring was located on the northern bank of the Santa Fe, and – as with Suwannee Springs – it was claimed that bathing in its mineral-rich water would yield various health benefits. Tourist facilities for the spring included a hotel, recreation hall, dancing pavilion, and bathhouse. In 1906 the springhead was walled off with concrete, enabling the waters to be funneled into a brand new 90’x50’ concrete swimming pool.

The following photos are on display at the entrance
to the Chastain-Seay Park in Worthington Springs: 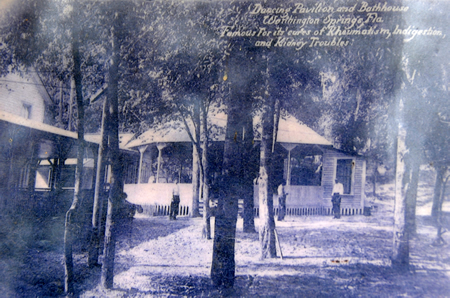 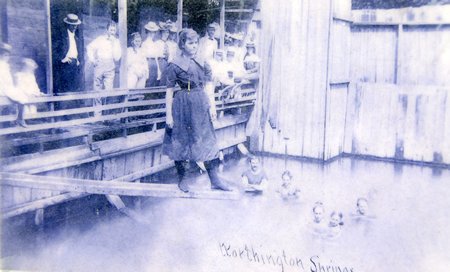 This one was labeled 'cooling off at the pool' 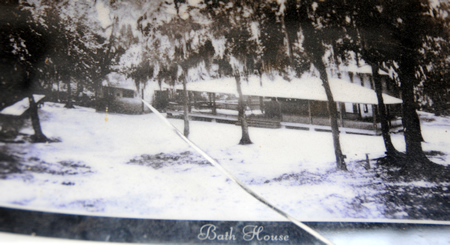 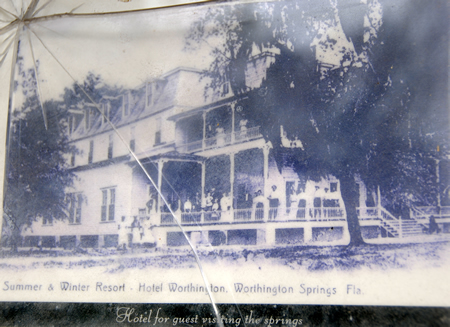 Unfortunately, by the middle of the twentieth century the spring’s output began to drastically decrease to nothing but a trickle. While the former resort and spring area were turned into the Chastain-Seay community park with boardwalks, picnic tables, and camping areas back in 2002, although nothing remains of either the resort structures or the springs itself. I drove over to the Chastain-Seay Park last week, hoping to find remnants of either the spring or any of the tourist facilities. I located remains of two different foundations, but nothing else. The closest thing resembling a walled off springhead was a fenced in retention pond with a drainage pipe flowing into it. It was close to one of the foundations I had located, and it had a low concrete wall at one end; it seemed possible – if horribly depressing – that the former springhead could have been turned into a retention pond.

The following pictures were taken at the Chastain-Seay Park during the first week of March 2016. I was the only person at the park when I took these. 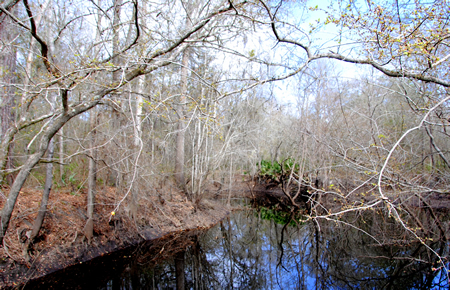 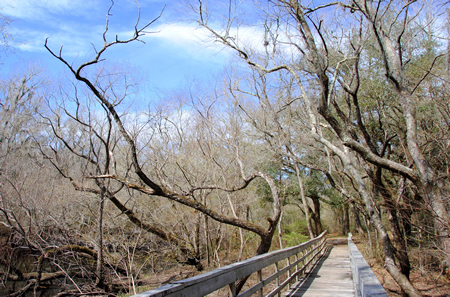 One of many boardwalks 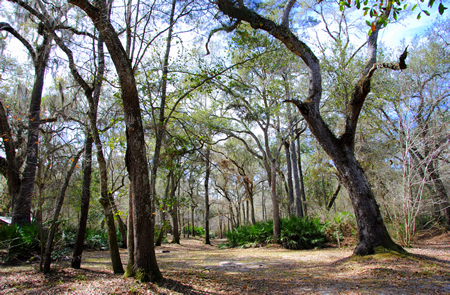 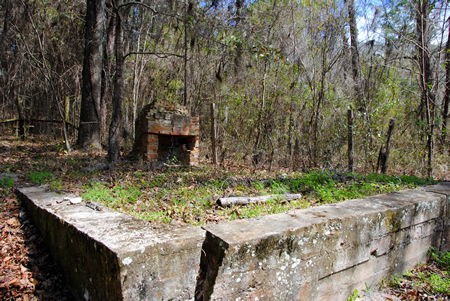 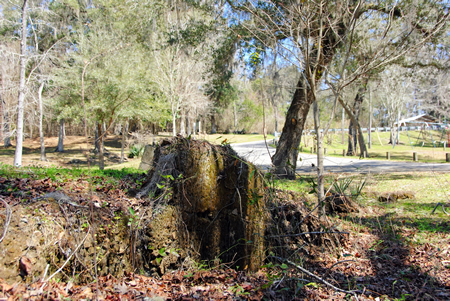 Remains of a foundation and wall 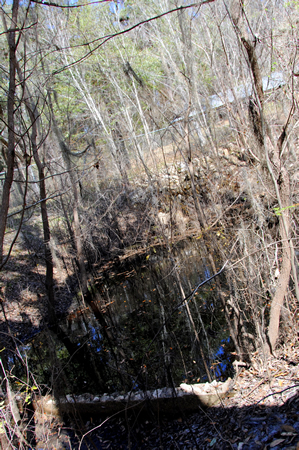 Fenced in retention pond with low concrete wall at one end 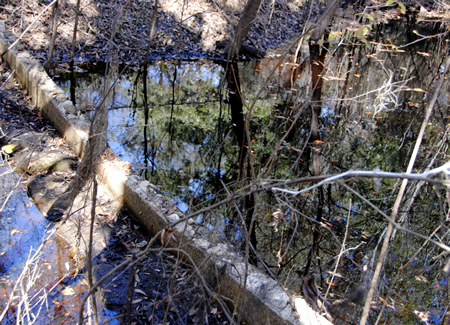 Closer look at the low concrete wall.
(There was a weak flow of water from this point when I was there.) 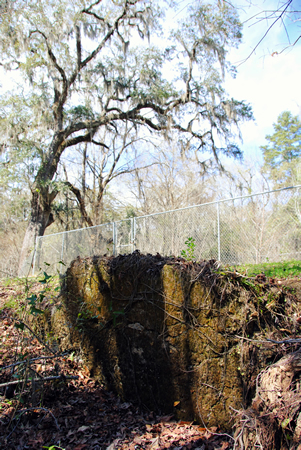 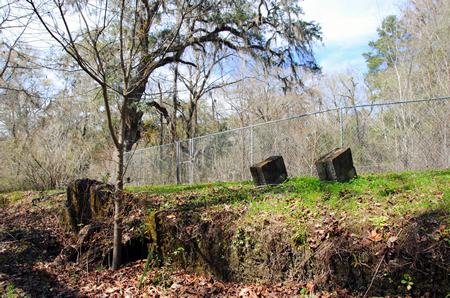 I got home, and began writing up this blog post. I had done some research about Worthington Springs before heading over there, but I found a website with information about the springs after I returned home that I hadn’t looked at previously, which had a little more information about the location of the springs. The website contained a report from the Florida Department of Natural Resources on the springs of Florida published in 1978, although the information it contained about Worthington Springs within the report came from 1972. 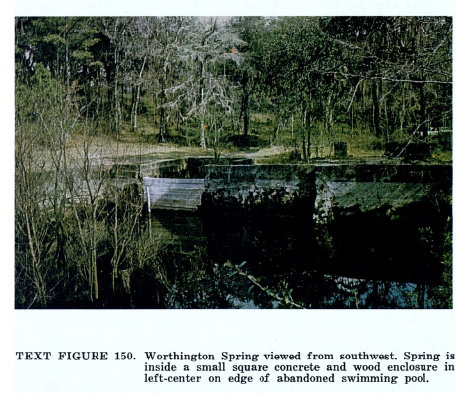 If the roads in the area are the same as the roads which existed in the 1970s, then the retention pond is not the location of the former spring. Of course, this also meant that even though I had walked close to the area described and was fairly certain that nothing like this was there, I had not been to the exact location. I decided to go back and look again, although I wasn’t able to get back there until this morning. I re-scoured the park, looking for any signs of the pool, but other than what looked like a beaver dam, I found no evidence of it or the spring.

The following photos were taken at the Chastain-Seay Park on March 13, 2016. There were a whopping four other people in the park when I was there. 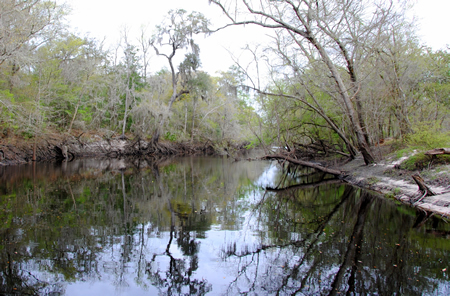 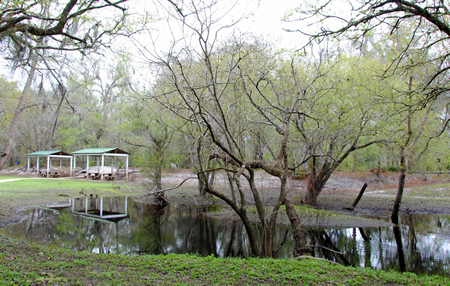 This stagnant area was located 400 feet west of the end of the road that currently parallels the highway; however, there is no visible evidence of a spring at this location. 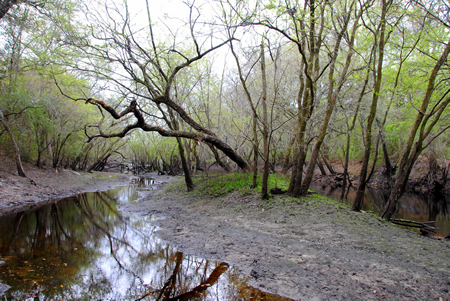 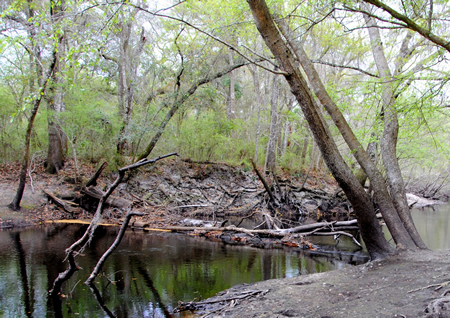