In 2013, I spent my summer in the country of Kyrgyzstan. I spent one month in the tiny village of Bar Bulak, known mainly within Kyrgyzstan for its hot springs. People come to Bar Bulak from around the country to soak in the water and thereby achieve a myriad of health benefits. According to the sign (pictured below), “The Hot Springs is helpful for the following illnesses: arthritis and other afflictions of the joints, stomach acid (heartburn and ulcers), intestinal ailments, liver and gall bladder problems, nervous disorders, and chronic female ailments.” 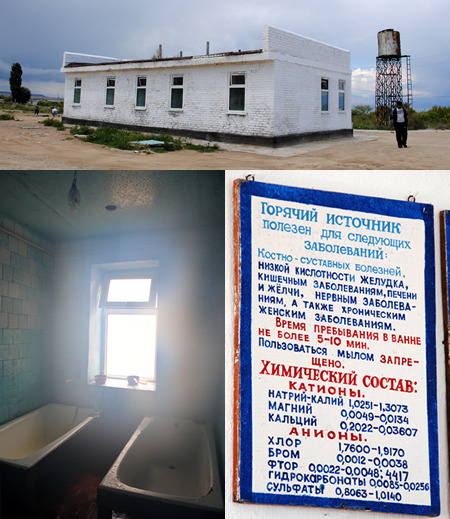 The hot springs at Bar Bulak, Kyrgyzstan in 2013

While the quaint, old-fashioned notion that soaking in mineral waters helps alleviate various illnesses is still a commonly held belief in Kyrgyzstan, it hasn’t been an accepted therapy in the United States for nearly a century. However, at one point in time the belief in the therapeutic properties of basking in mineral waters was popular in the United States. Tourists flocked to Florida to take the waters of the state’s numerous springs in hopes of enhancing their health. At the time, one of the most popular restorative springs destinations was Suwannee Springs (also known as Suwannee Sulphur Springs, for the sulphur-content of its water).

Beginning in the 1880s development of the springs for tourism purposes began. Over the years, three different hotels, a springhouse, and numerous cabins were erected, as well as a train station located a mile from the springs, connected to the facility by a horse-drawn trolley line. The first hotel, with 125 rooms, was built in 1883, but it burned to the ground the following year. The second hotel was built concurrently with the approximately 15 cabins shortly thereafter, although the second hotel, too, succumbed to fire in the early 1900s. The cabins and the much smaller hotel annex (third hotel) remained open for business for several subsequent decades. Visitors were urged not just to swim in the springs in order cure their ailments, but to drink the restorative waters as well. 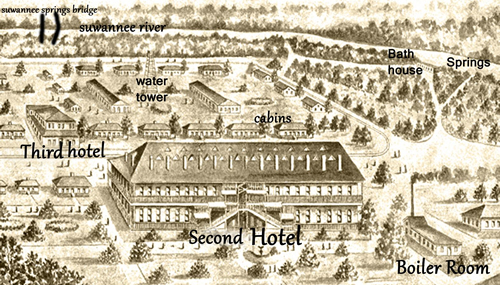 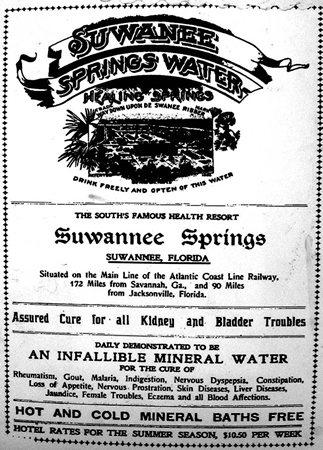 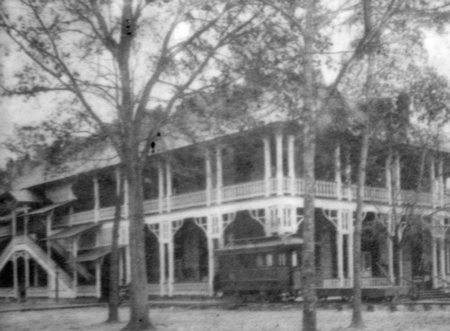 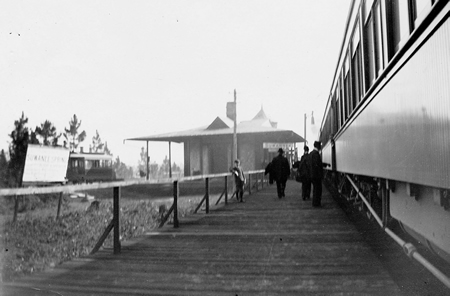 Suwannee Station, about a mile from the springs. Passengers would disembark and travel to the springs and hotels via horse-drawn trolley. (Source) 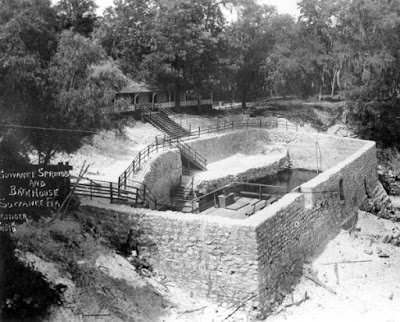 Suwannee Springs in the 1890s (Source) 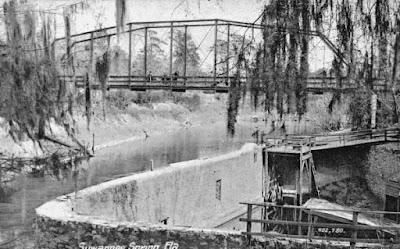 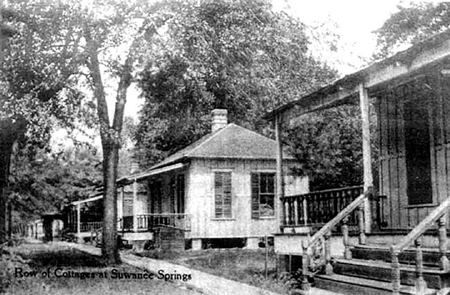 What remains of two cabins, the springhouse, and the third hotel (which was later converted into a store), can still be seen today, in addition to the pilings from the old railroad bridge and former automotive bridge, abandoned in 1971 when highway 129 was routed onto a new bridge a quarter of a mile to the north. The following pictures were taken by me in 2014 and 2015. 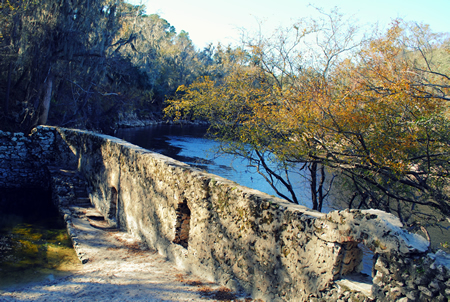 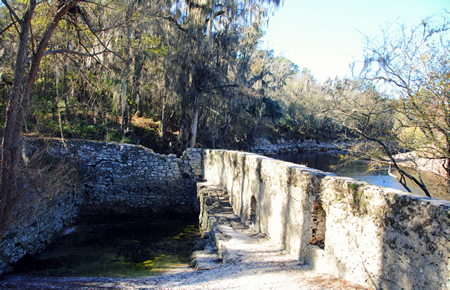 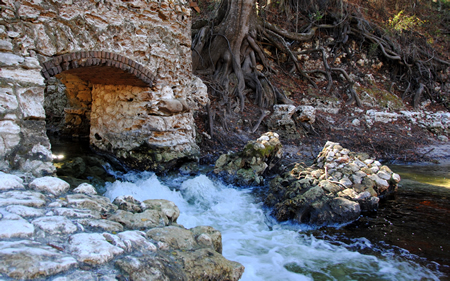 Water flowing from the springhouse into the Suwannee River 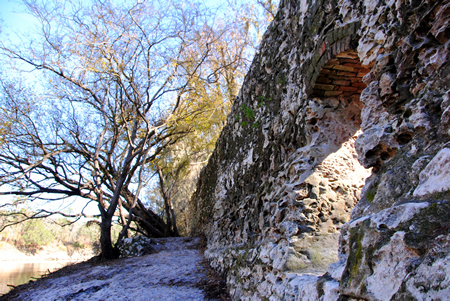 External wall of the springhouse 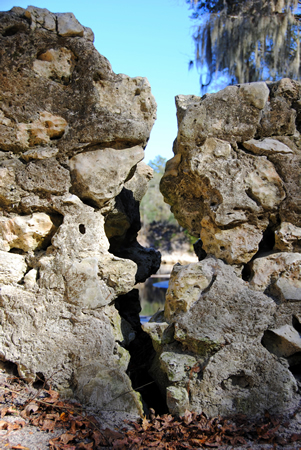 View from inside the springhouse, facing upriver. 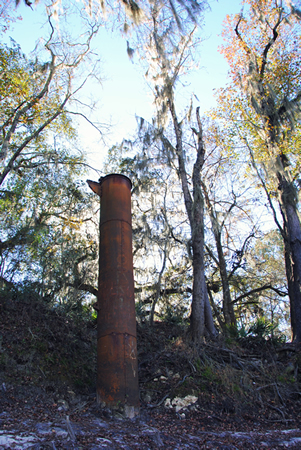 All that remains of the old railroad bridge. 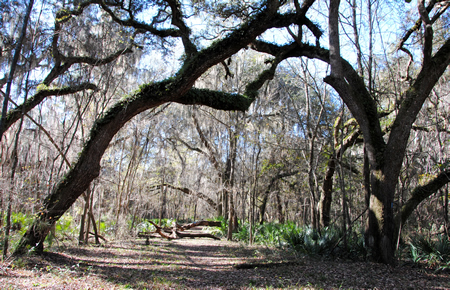 The old road from the springhouse to the cottages. 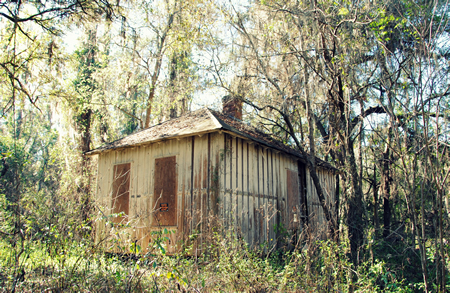 One of the two remaining cottages. 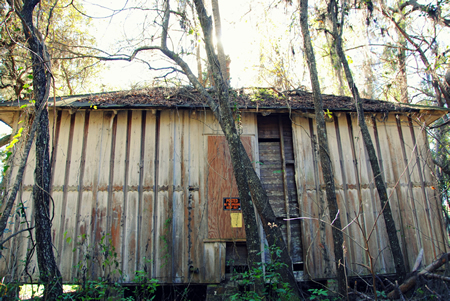 The other remaining cottage. 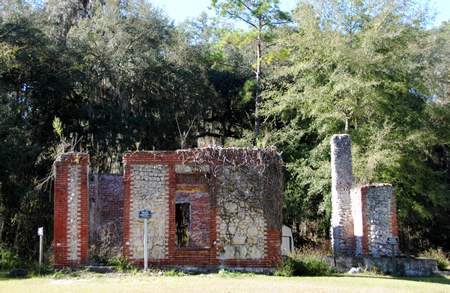 Remains of the third hotel's kitchen annex, which operated as a local store for many years. 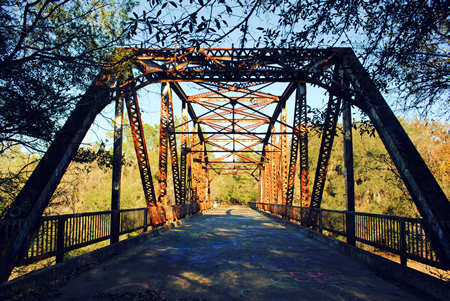 The automotive bridge over the Suwannee River, closed to cars since 1971. 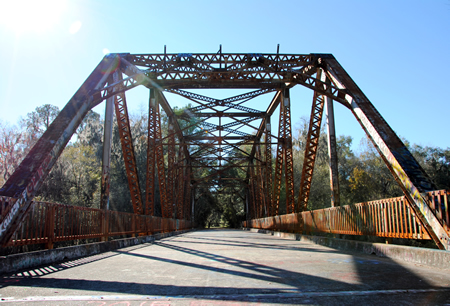 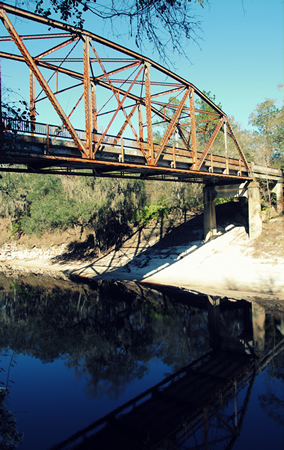 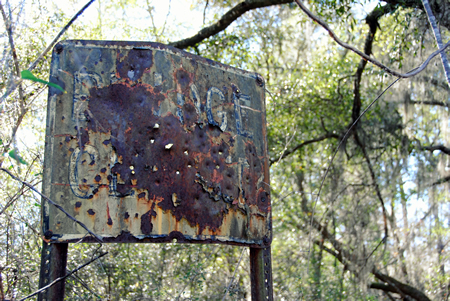 Bridge Closed sign north of the bridge is barely legible - and unnecessary as there is no possibility of vehicular access from the north. 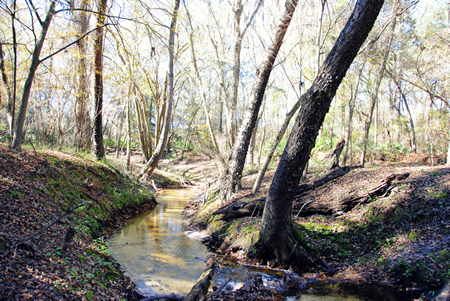 The remains of Old 129 dead end at Sugar Creek, a short walk north of the bridge.