Adventures Across the Border: Cumberland Island

Okay, okay, so this is Desolation Florida, and Cumberland Island is located off the coast of Georgia, I know. However, not only is it located right at the border between modern day Florida and Georgia, but back when the Spanish owned the state, what is now Cumberland Island was part of Spanish Florida. The island remained part of Spanish Florida until the Spanish abandoned it in 1684. Plus, as late as the late 1800s, the Carnegie family (who resided on the island at the time) had their mail delivered via the address "Cumberland Island, Fernandina Beach, Florida." I think that's enough justification to include this lovely, desolate island here on this blog.

From the 1780s through the American Civil War in the 1860s, Cumberland Island was the location of large sea island cotton plantations - in which the cotton was planted and picked by slaves, with the largest plantations belonging to the Miller and Stafford families. In the 1880s, the bulk of the island was purchased by Thomas Carnegie as a present for his wife Lucy, and they built a grand mansion at the location of the former Miller plantation home. The Millers' mansion had been named Dungeness, and the even more palatial Carnegie mansion retained the name. Even though Thomas Carnegie died fairly young, Dungeness served as Lucy Carnegie's southern home until her death in 1916. The island, and several "cottages" (which we normal folk would call mansions) remained in the Carnegie family for generations (some of the few remaining inhabited properties on the island today are lived in by descendants of the Carnegies), although once the Great Depression hit, Dungeness and many of the Carnegie vacation "cottages" were left vacant. Dungeness was destroyed by fire in 1959; only ruins remain. One of the former Carnegie "cottages," Plum Orchard was abandoned and left to decay, but has since been restored by the National Park Service, which now owns most of the island, and it is open to the public for tours. While the Carnegies and their extended families were busy constructing opulent residences, said residences were staffed mainly by African Americans, the majority of whom resided in their own small community near the northern tip of the island. Few structures remain from this community, although the most well-known of the remaining structures is the First African Baptist Church, founded in 1893. It is most famous for - of all things - being the location of John F. Kennedy, Jr.'s wedding in 1996. 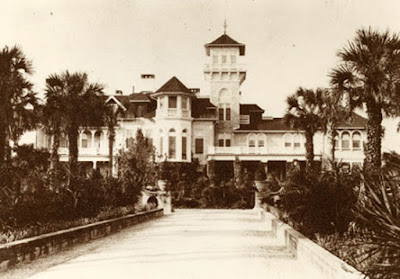 Dungeness in its prime 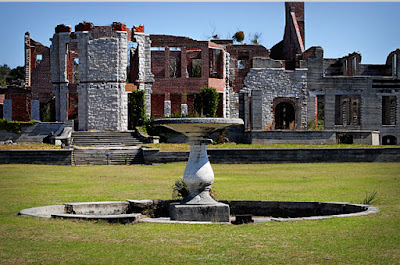 The ruins of Dungeness (source) 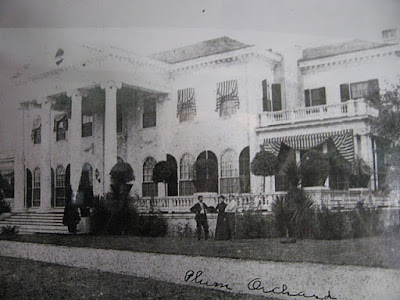 Plum Orchard in its prime

A smattering of private residences dot Cumberland Island, but it is mostly uninhabited by humans. The island is covered mainly by a maritime forest, filled with live oak trees, dripping with Spanish moss, and it is surrounded by salt-marshes and pristine beaches. Visitors to the island must come by boat (or private plane), which limits the number of people on the island at any given time. The most common way to get to the island is via ferry, which runs twice a day from St. Marys, GA. The ruins of Dungeness near the southern end of the island are one of the most popular sites for visitors, and they are easily accessible on foot from the southern ferry dock. Dodgy bicycles can be rented at the northern ferry dock, which can enable day-trippers to explore farther than they could on foot - including to the Plum Orchard "cottage." Additionally, rather pricey van tours can drive visitors around the island, although space in those are rather limited.

Last Saturday, my mom, my aunt, and I took the 9:00am ferry from St. Marys, GA to the island. All week we had been anxiously watching the weather reports, which had been predicting anywhere from a 60% to 100% chance of severe thunderstorms for all day Saturday. Ferry tickets must be purchased in advance, and are only refundable until ten days out, so once you've got your tickets, you're pretty much stuck with them. Luckily, despite the short (if rather severe) thunderstorm which struck right as our ferry docked, the vast majority of our day on Cumberland Island was overcast, but not rainy.

As my mom had seen the ruins of Dungeness before, but had not seen Plum Orchard (as it was not open to the public on her previous trip), so we disembarked at the northern ferry stop where the bike rentals were located. Our plan was to ride north (seven miles, one way) to see Plum Orchard, then head back south to Dungeness and the southern beaches before returning the bikes back at the northern dock. In hindsight, we may have been somewhat overambitious in our plans. Let's just say that we did not make it to the fairly close Dungeness, and we had no chance of making it to the remains of the settlement at the island's northern tip. This, of course, simply means that I have an excuse to return.

The bicycles available to rent for $16/day are, to be honest, rather crappy. Mine was so rusty that the chain made this rrrrraaaaaakk sound every time I pedaled. They had made a point of telling us that if we needed to raise or lower our seats, all seats easily raised and lowered. My mom had thought her seat was fine, but after a mile or so of struggling to maintain balance, my aunt and I suggested that she raise her seat. And of course hers was jammed into position such that the seat could not be raised a millimeter. As a result, my mom wasn't comfortable on her bike, couldn't go very fast, and kept falling over because she couldn't maintain her balance. I ended up swapping bikes with her during the last quarter of our trip, and it was too short for me (and she's two inches taller). Needless to say, it took us a lot longer to get to Plum Orchard than expected. The following images are of the "road" to Plum Orchard. 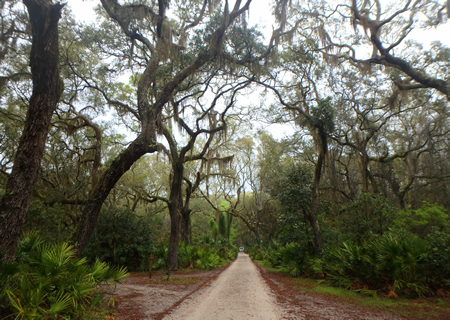 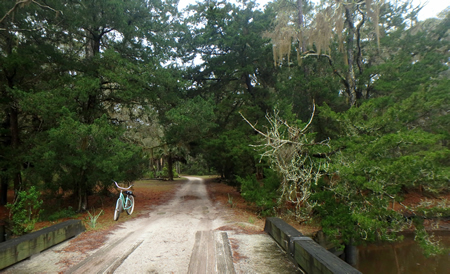 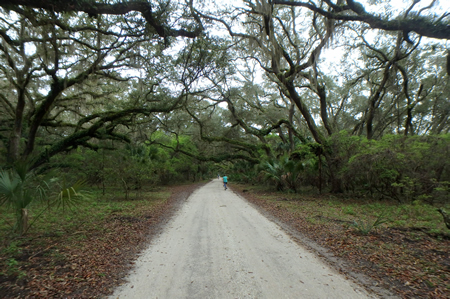 We arrived at Plum Orchard just before noon, and learned that the next tour wasn't until 1:00. We explored the area surrounding the "cottage" and consumed the ridiculously large picnic lunch which we'd brought, and then had an excellent tour of nearly all parts of Plum Orchard - including its super creepy basement and indoor swimming pool. Then it was time to start heading back south. 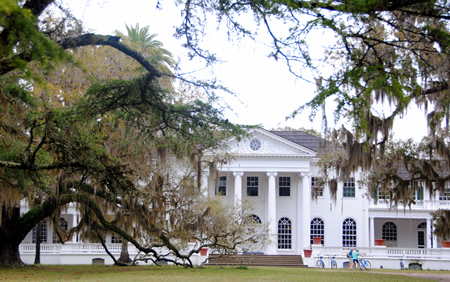 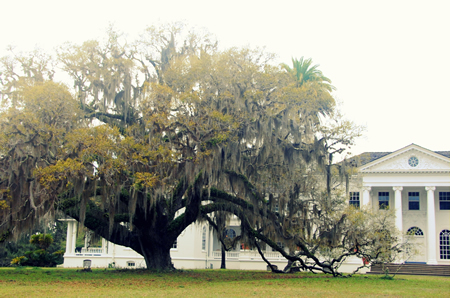 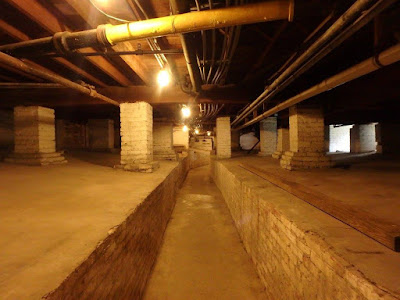 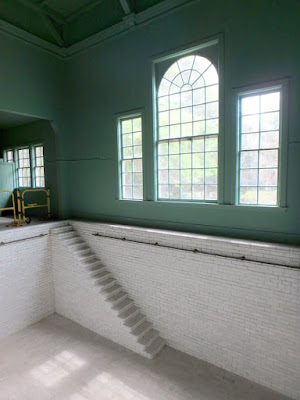 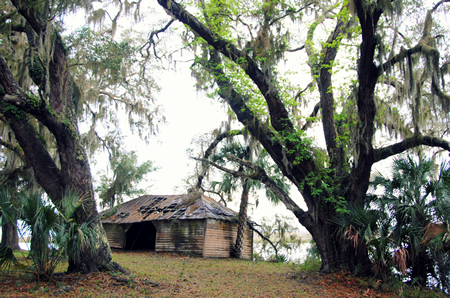 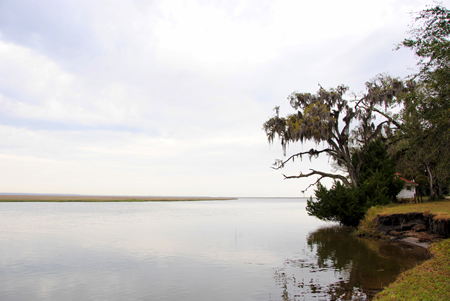 View from the dock at Plum Orchard 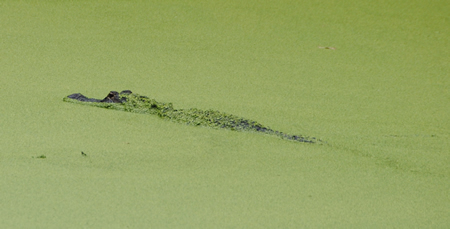 Alligator in the pond behind Plum Orchard

When I was a child (somewhere around the age of four), my parents and I visited Cumberland Island. Now, one of the things the island is known for is its herds of wild, feral horses. Currently there are around a hundred and fifty feral horses living on the island. While I do not actually remember my family's trip, there is one story that my parents have been telling over and over for years: Apparently four(ish) year old me wandered rather far ahead of them. They heard hoofbeats, and yelled for me to come back. Apparently my typical response to commands at the time was to ignore them and/or demand to know why (instead of obeying). That time, I immediately turned around and came back - and narrowly avoided getting trampled by a galloping herd of Cumberland Island feral horses. While I didn't plan to come close to getting trampled this time around, I had been looking forward to seeing wild horses - up close if at all possible. Alas, while we did see quite a few, they were rather far away - best viewed through my zoom lens, fully extended: 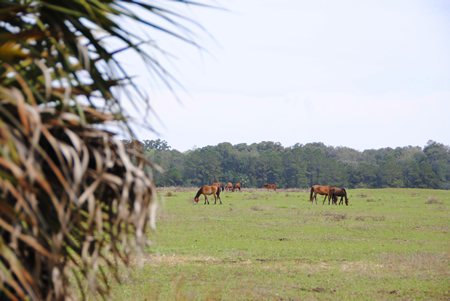 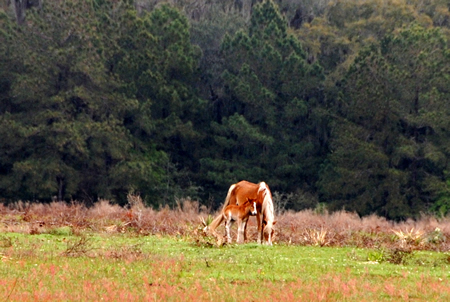 We were able to see a mare and her foal, though!

Due to mom's "bike from hell" as she called it, we ended up getting back to the northern dock with only enough time to walk to the nearest beach, Seacamp Beach. It was beautiful and desolate, and dotted with hoofprints, although there was nary a horse in sight. 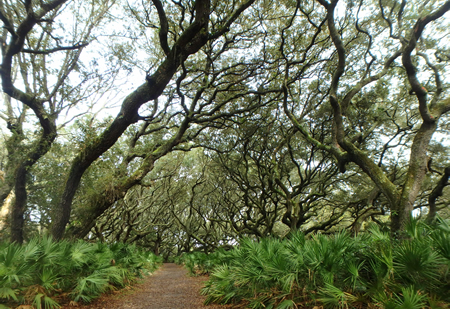 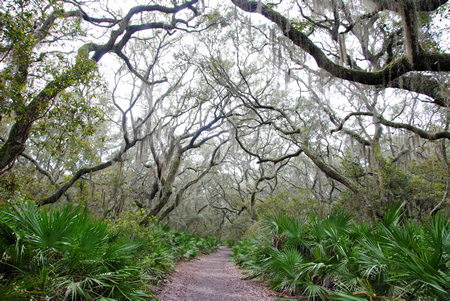 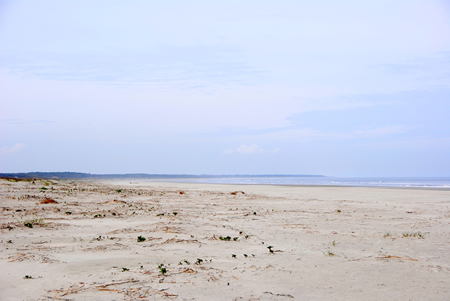 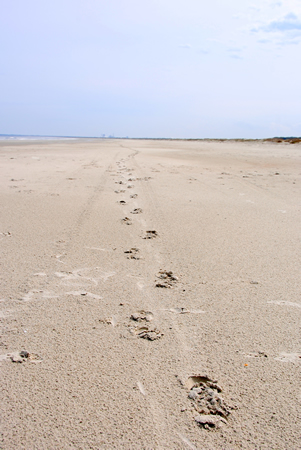 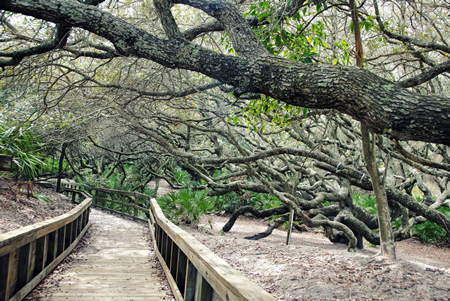 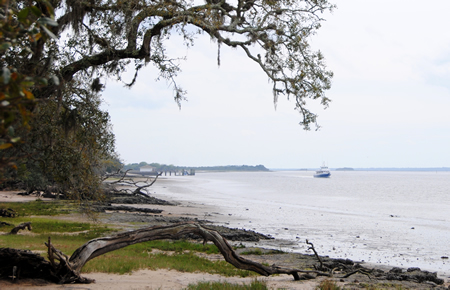 View from the northern ferry dock, awaiting its arrival