If you've been following this blog for a while now, you may remember that back in December 2015, I went in search of the Drew Mansion in what remains of the community of Ellaville, Florida. If you read the post (which can be found here), you'll know that while we found all sorts of interesting things that day, we found neither the remains of the mansion nor the Ellaville Cemetery. I knew that I would need to return again with better information as to where the mansion and the cemetery were located, and I was finally able to do just that. I am not going to get into the history of Ellaville in this post, as I covered that pretty extensively in my first post on the community; if you're interested in the community's history, please read my initial Ellaville post, where I covered Ellaville's history in depth.

The Drew Mansion was built in 1868 and was the home of George F. Drew, who was the governor of the state of Florida from 1877-1881. I have even less information on the cemetery; all I can tell you is that it is located just to the northwest of what remains of the mansion. Unlike my previous trip, where my plan had essentially been 'wander around until I find it' - this time I came armed with a map and rough GPS coordinates (approximately N30.39218° W83.18306°, if you're interested). Note the cemetery and the Drew Mansion in the northwest quadrant (source)
My explorations on my initial visit had been in the area near the center right where you can see the number 60.

You can park in the parking lot down by the old bridge and take the hiking trail marked with blue blazes, or you can park on the dirt road paralleling the power lines which is much closer to the mansion site, and pick up the trail where it crosses the dirt road alongside the railroad tracks. I did the latter as it was Florida in August and the temperatures were in the upper 90s and I wanted to minimize my time in the heat as best I could. Finding what I was looking for was certainly much easier with GPS coordinates and a blazed trail, but even so, it was not easy. Given the location of the mansion site relative to the road, I had assumed that I would discover it before I found the cemetery. While unnatural topography resembling old roads and the existence of plants such as crepe myrtles at the GPS coordinates I'd brought led me to believe that I was indeed in the right place, I saw none of the ruins I'd come to find.

I continued to follow the blue-blazed trail, however, and it did lead me to the cemetery. I wish I knew more about the cemetery; if any of you have information on how many graves are actually there and who is buried in them, I would love to know! Only two graves had readable inscriptions, and most seem to have had their headstones removed from their bases. At some point a survey must have been conducted of the site, as the graves (both the marked and unmarked) had been flagged... but the flags seem to have been out there for a long time. 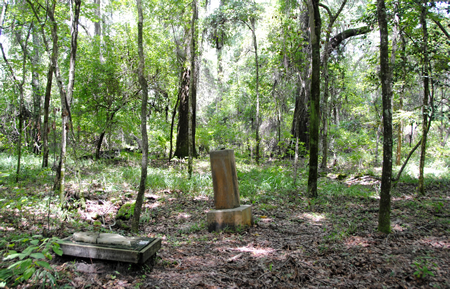 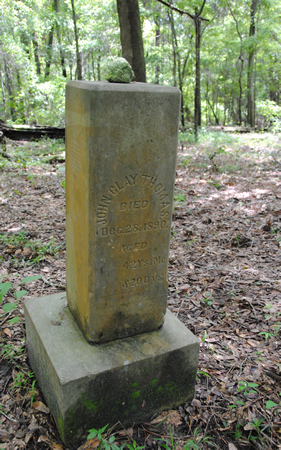 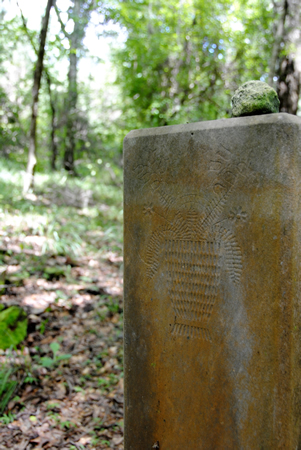 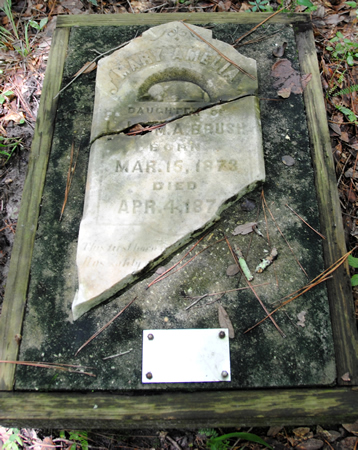 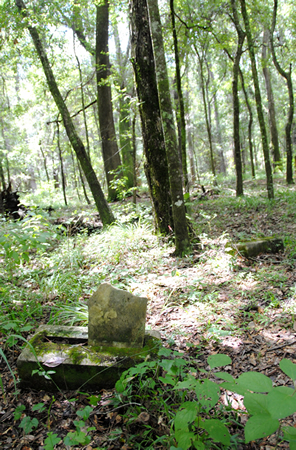 Base stone with unreadable remains of headstone 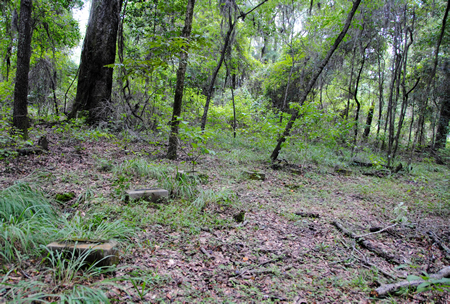 I counted seven other base stones, all missing their headstones.

Leading into the woods from the cemetery in the direction where I knew the ruins of the mansion were said to be was an unmarked footpath. I set off down it, and even though it petered out rather soon, the woods were open enough that walking through them wasn't difficult. I headed back in the direction of the GPS coordinates that I'd brought with me, and eventually I did stumble upon the ruins. They weren't exactly at the coordinates I'd brought, but they were close. So, what was this mansion that I'd come looking for? Well, as I mentioned above, it was built in 1868 and was the home of Florida Governor George F. Drew. However, by the turn of the twentieth century, the community in which the mansion had been built was already in decline, and the mansion was clearly in the early stages of decay by the 1930s. It sat, crumbling in the woods, victim of nature and vandalism, until it succumbed to arson in the 1970s. 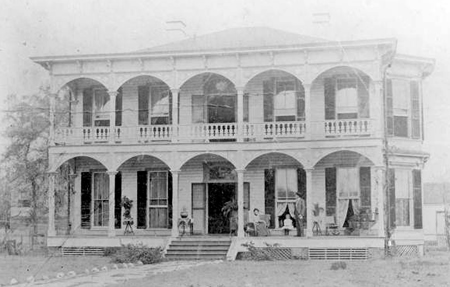 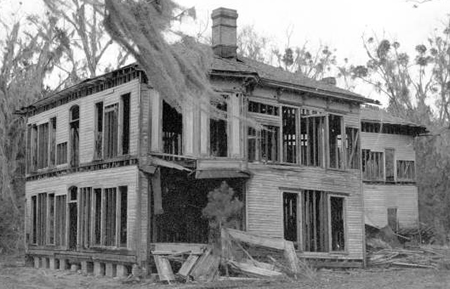 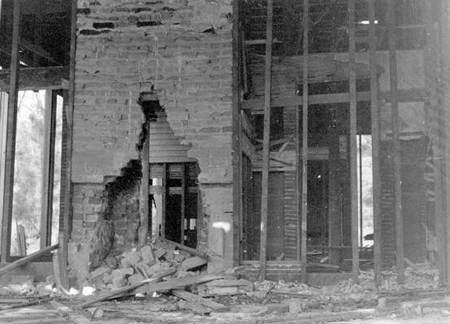 Now, before we move on to my photos of the ruins, I want you to take a good look - not only at the photos posted above, but at the following one as well, specifically at its base: 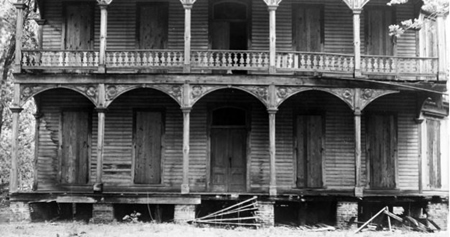 In every image I have seen of the Drew Mansion, it is built on brick pilings up off the ground. It does not have extensive walled foundations. The mansion itself was built almost entirely of wood, with the exception of the aforementioned brick pilings and its chimneys and fireplaces. One would, therefore, expect the mansion's post-arson ruins to consist of brick pilings, brick fireplaces, and brick chimneys. However, the ruins that I (and apparently everyone on the internet who has visited the ruins that are, ostensibly, of Drew Mansion), have found extensive brick foundations which do not match anything I have seen in any of the pictures of the mansion. So what is it that we have found? What is it that everyone who visits this site proclaims to be the ruins of the Drew Mansion? I have no idea. It was big enough, certainly. Here are my pictures; you be the judge: 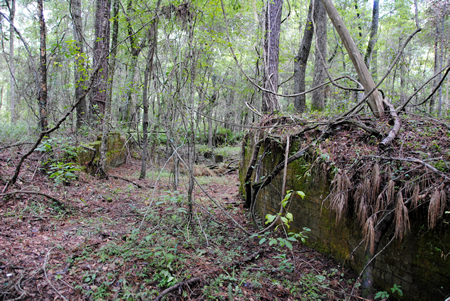 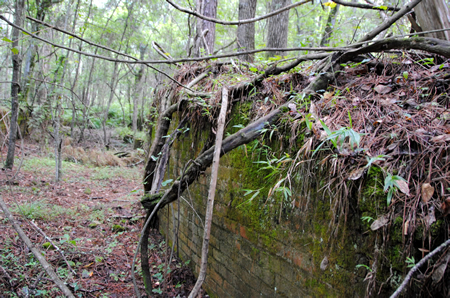 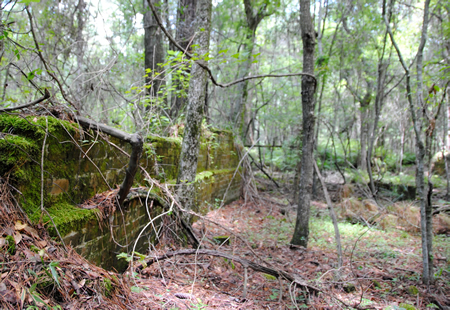 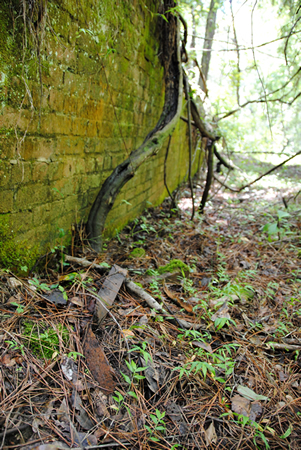 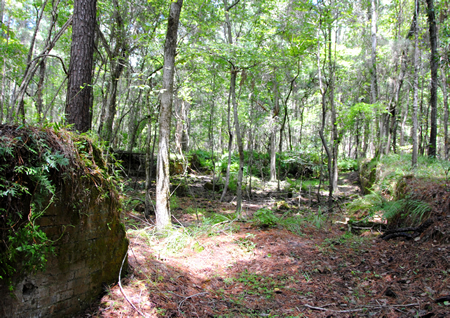 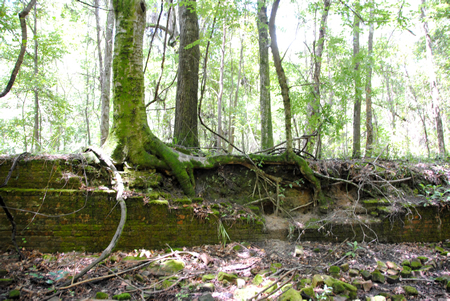 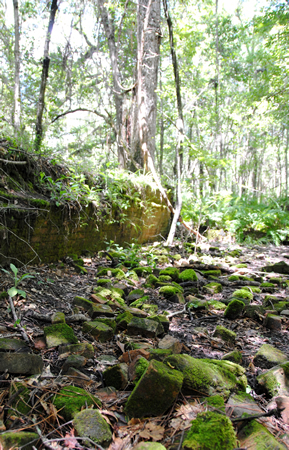 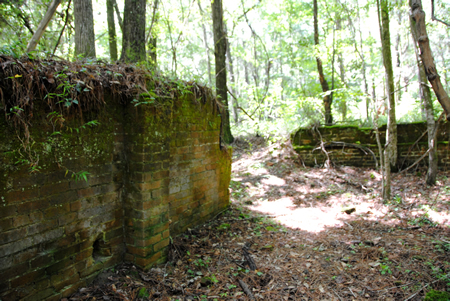 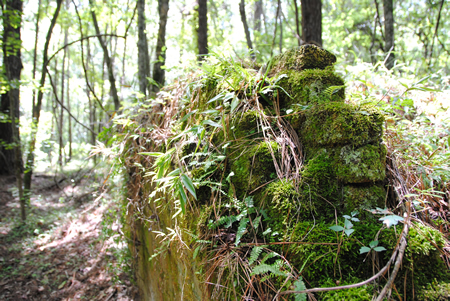 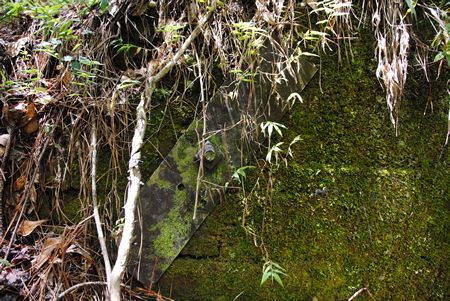 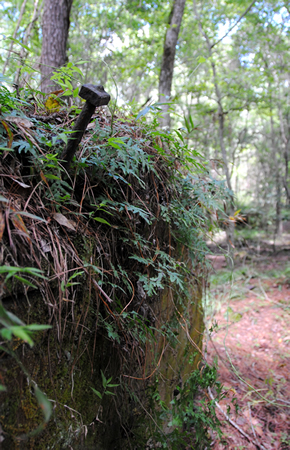 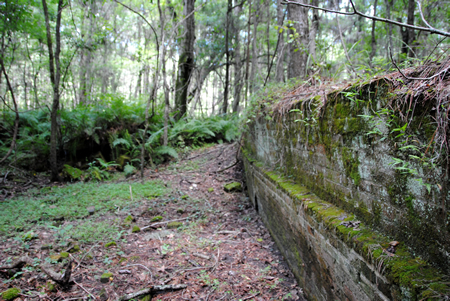 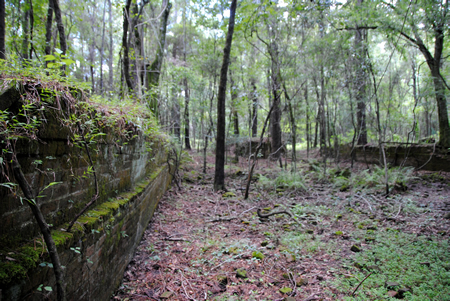 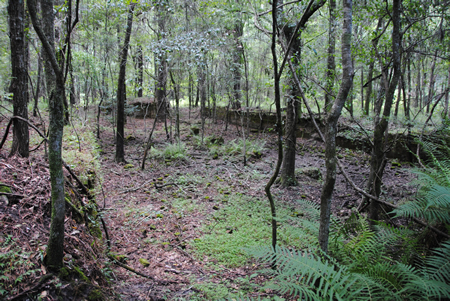 It was something, alright, but the Drew Mansion? I have my doubts.

For more on the history of Ellaville, including a comprehensive set of links,
please check out Exploring Ellaville, Part 1.
Posted by Annie Nimity at 7:00:00 PM