Roughly midway between Live Oak in Suwannee County and Lee in Madison County, Highway 90 crosses the Suwannee River, just south of the confluence of the Suwannee and Withlacoochee rivers. At this location – on the Madison County side of the rivers – a bustling community centered around a large timber mill once existed. This community was founded in the late 1860s, when lumber magnate George F. Drew (who would later become the 12th governor of Florida) opened what was, at the time, the largest sawmill in the state of Florida. He named it Ellaville, and according to legend this was to honor Ella, his long-time African-American servant of that name. The area was covered in thick forests of yellow pine ready to be harvested, and the combination of the rivers and the fact that Ellaville was located along the railroad line connecting Jacksonville and Tallahassee, made it easy to transport lumber to market. The combination of the busy sawmill and the opulent residence of the state’s governor led Ellaville to grow and thrive. At one point, in addition to the sawmill and the governor’s mansion and the homes of the town’s several hundred residents, Ellaville boasted a post office, train station, two schools, churches, a cemetery, stores, a telegraph unit, and more. Additionally, the town’s location along the route of the Old Spanish Trail / Old Bellamy Road / modern Highway 90 ensured regular through-traffic, even in the horse-and-buggy days. 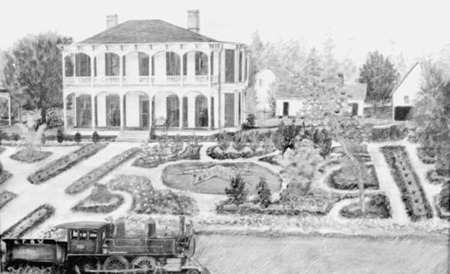 Painting of the Drew Mansion and gardens in its heyday in the late 1800s.
From here. 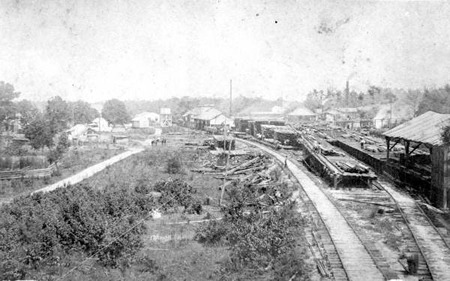 The Ellaville sawmill in 1884
From here. 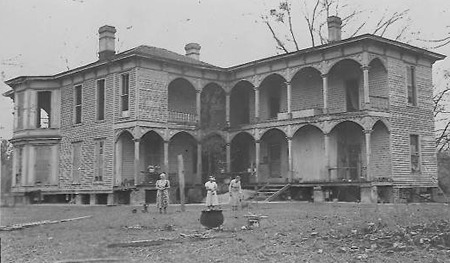 Drew Mansion in early stages of decay, 1932.
From here. 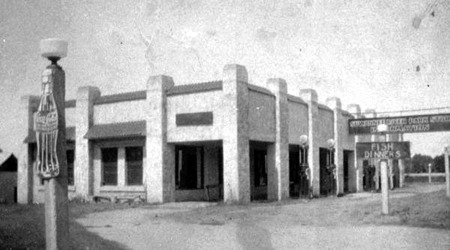 However, while trees are a renewable resource, they were not planted and farmed in the late 1800s and early 1900s. Once the supply of trees fueling the mill diminished, the community of Ellaville did as well. This, combined with massive flooding, the Great Depression, and two successive world wars slowly killed off the community. In 1942, the Ellaville post office closed its doors for good, as there weren’t enough local residents to justify its presence. Two of the few remaining landmarks of Ellaville were the distinctive Suwannee River Store built in 1927, and the decaying remains of the long-abandoned Drew mansion. However, the Drew mansion succumbed to arson in 1970, and repeated flooding and the re-routing of Highway 90 across a more modern bridge to the west of Ellaville in 1986 led to the store being abandoned as well. 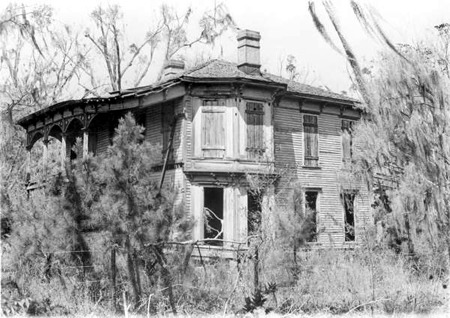 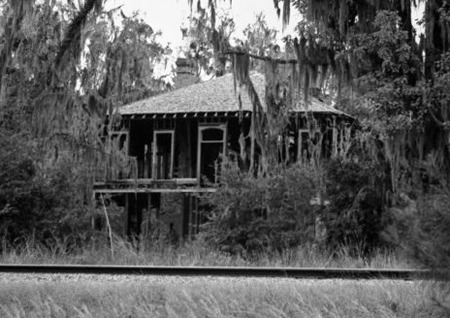 Drew Mansion, photographed in the late 1960s
From here.

Google Street View of the Suwannee River Store taken in 2008

Today, the modern “community” of Ellaville is located just to the south of the Suwannee River, in Suwannee County. There you will find one convenience store, and a law enforcement weigh-station. You can park and access the old Hillman bridge from the Suwannee county side or the Madison county side, although there is a parking lot with picnic tables on the Madison side. Of the once bustling town of Ellaville on the Madison side of the river, there is little sign, other than the parking lot, some historical markers, the overgrown remains of the Suwannee River Store, and two private residences.

One of our readers suggested a while back that we should check out the remains of the Governor Drew mansion in Ellaville, if we hadn’t already… and since we had free time and glorious weather this past weekend, we decided to do just that. We were not exactly successful. We found things, certainly, interesting things, but we found neither the remains of the mansion nor the cemetery, which were the two things we had really hoped to find and photograph. We may have been thrown off the scent a bit by attempting to follow the rather confusing directions of how to find said locations given to us by one of the few remaining locals. C’est la vie. But like I said, just because we didn’t find the mansion or the cemetery didn’t mean we didn’t find anything… 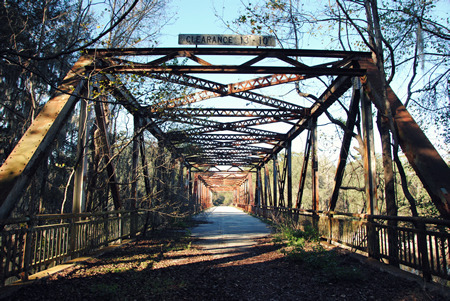 This is the entrance to the Hillman Bridge from the Suwannee County side.
The road is closed to cars, but open to pedestrians and cyclists. 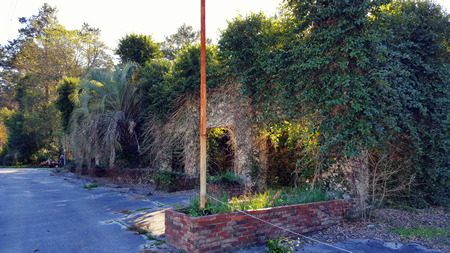 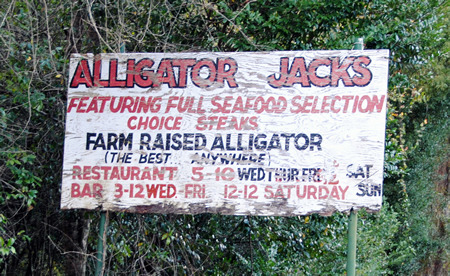 This sign still stands, but the restaurant (and the enclosure where they kept the alligators) does not. Apparently the restaurant closed in the 1980s. [More info here.]

Out in the brush in the area where we hoped to find the remains of the Drew mansion and nearby cemetery, we did indeed find plenty of stuff. However, having seen videos of the current state of the mansion and cemetery shot just a few months ago (links at the bottom of this post), it is clear that we most definitely did not find what we were looking for. Still... 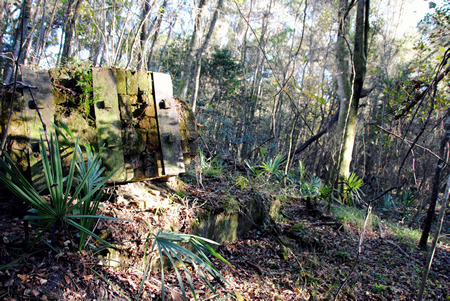 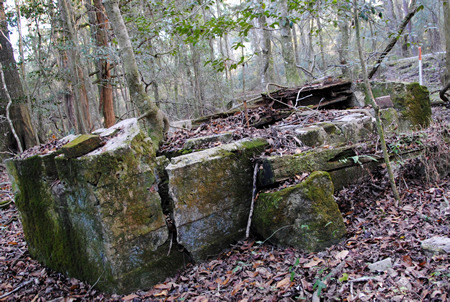 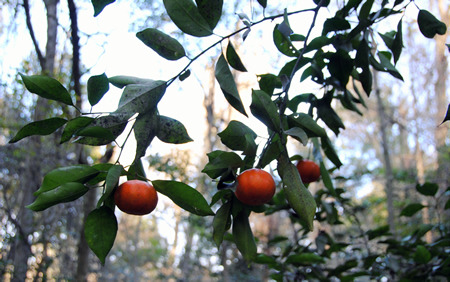 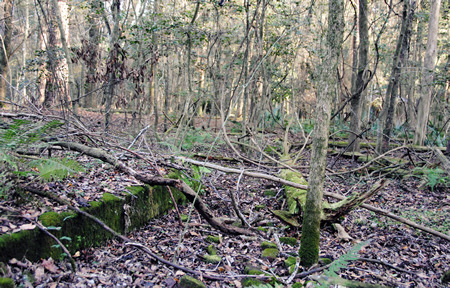 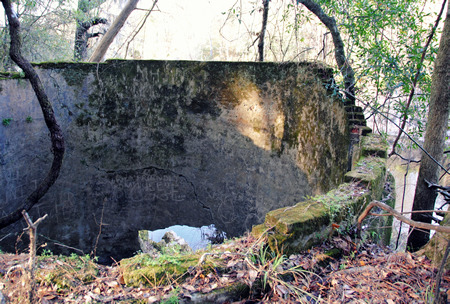 Remains of a cistern? (Located on the bank of the Withlacoochee River) 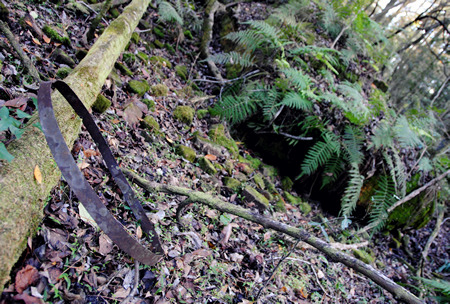 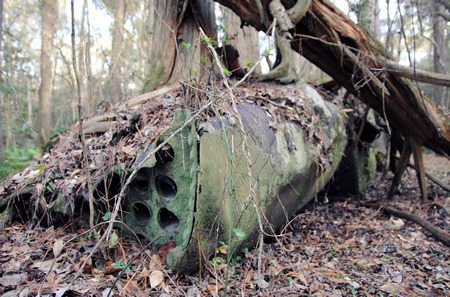 According to this site, the mill had a small 0-4-0 steam locomotive.
Could this be the remains of its boiler?

Eventually, the early December evening began to encroach, making wandering about a forest looking for the foundations of a mansion and the grave markers of former inhabitants even more of a challenge. After returning to the car, I decided to give finding the Swannacoochee Spring a shot. If you take the trail straight from the far end of the parking lot and cross under the railroad tracks, you will easily reach this springs. I knew nothing of Suwannacoochee Spring before this trip, so I was pleased to discover that it is surrounded by the remains of an old spring house. (The Withlacoochee is quite low at the moment; there are pictures of the spring in which the water rises nearly to the top of the spring house.) 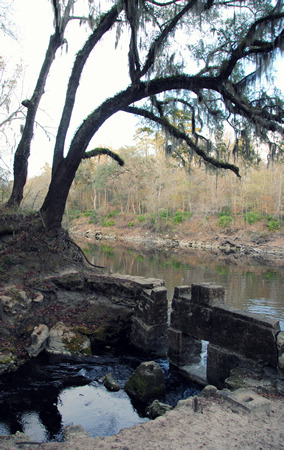 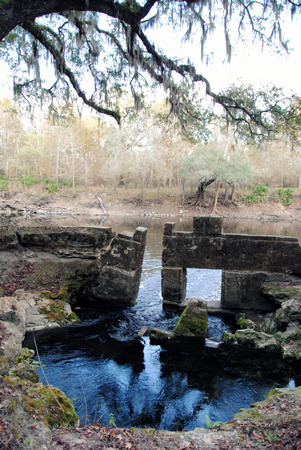 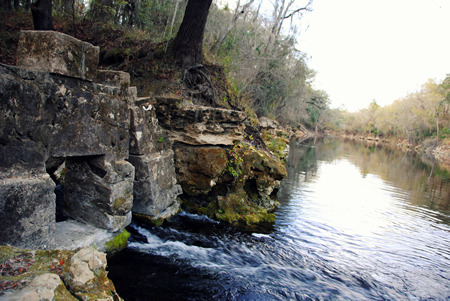 The spring is a second magnitude spring, and it has a very heavy flow; you can hear the water rushing out of the spring house and towards the Withlacoochee before you can see the spring house itself. I have found very little information on the history of the spring house at Suwannacoochee, although it seems likely that it was connected to the mill facilities. Additionally, from what I've read, there's an Ellaville Spring there in addition to this one, although goodness knows where exactly. Probably hiding next to the remains of the Drew mansion and the Ellaville cemetery which we never did find. We do, however, plan to try again at some point. In the interim, if you're interested in the complete set of what we found at Ellaville, please CLICK HERE to see my complete photo set.