The Dixie Mainline and Shired Island

The area of Florida known today as Dixie County remains sparsely populated – with fewer than 20,000 residents – and filled with vast swaths of picturesque desolation. While the county itself wasn’t formed until 1921 (when it separated from Lafayette County), the area was first inhabited by non-indigenous settlers in the 1820s. However, it is the period of the 1920s where today’s story begins. During that time, Florida’s logging industry had begun expanding into the swampland near the coast of the state’s Big Bend region. Due to the swampy nature of much of the land, raised rail-beds for small-gauge trams needed to be constructed in order to bring equipment in and to haul logs out. The longest of the former tram-beds, which ran from the town of Suwannee northward nearly to the community of Horseshoe Beach, was known as the Dixie Mainline.

The following three photographs are from the State of Florida Archives. They are labeled as logging from this time period in Dixie County, although whether or not they are from the Dixie Mainline is unknown. However, this should give you a good idea of how the logging operations in the area at that time looked. All three photos are from the 1920s. 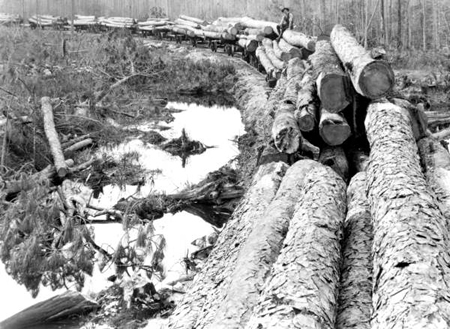 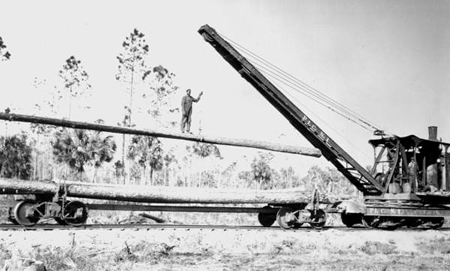 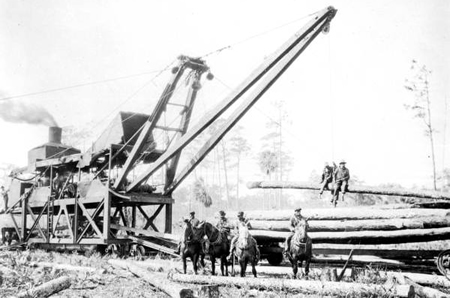 The boom-years of the Dixie County logging industry were from the 1920s through the 1940s, after which point the area was nearly entirely denuded of old growth forest. The rail lines were pulled, but the raised beds remained. The area was purchased in the late 1970s by the US Fish and Wildlife Service, and turned into what is now the Lower Suwannee National Wildlife Refuge. In the 1990s, the Dixie Mainline was made navigable once again: the lime-rock was shored up, and concrete bridges were erected over the various creeks. It was opened for public use in 1998.

The Dixie Mainline Trail extends 9 miles through the Lower Suwannee National Wildlife Refuge. It continues a further six or so miles as a county road. The Mainline can be driven, hiked, or cycled. There are several places along the Mainline where one can park in order to explore trails that can only be traversed on foot. However, when my mom and I visited in October 2016, little more than a month had passed since Hurricane Hermine had struck the area. As such, while the Mainline itself was perfectly passable, not all of the trails were. 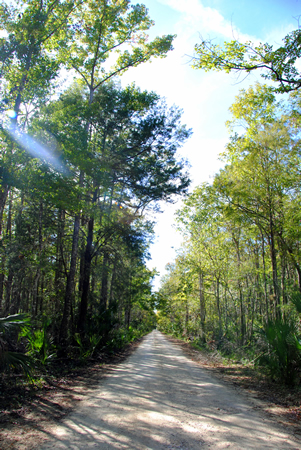 
One of the first places to pull off the Mainline (if you're heading north from Suwannee) is at Salt Creek, where there is a nature trail as well as a boardwalk. However, while the boardwalk has clearly been repaired following Hurricane Hermine, the trail... hadn't exactly been. The beginning of the trail has recently been bushhogged, but only a little ways into the woods. At that point everything remains covered in storm surge detritus. The did re-hang the sign, though! 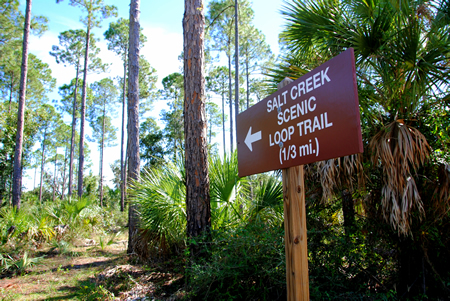 The view from the boardwalk over Salt Creek is quite lovely, however: 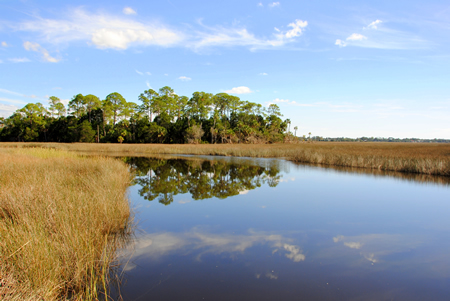 As the Mainline continues, you move away from pineforests and into palm-filled marshland: 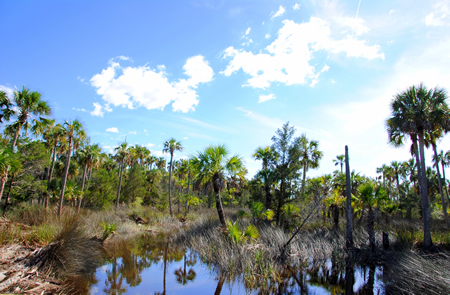 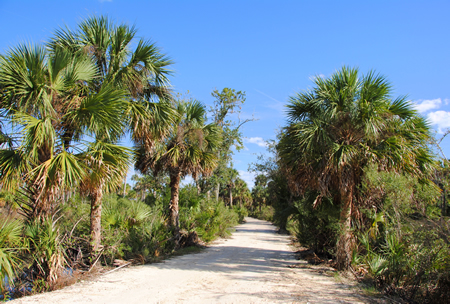 The map provided by the Lower Suwannee National Wildlife Refuge shows available canoe launching where the Mainline crosses Sanders Creek and Shired Creek; however, there didn't appear to be a visible launch point as such. While these would be gorgeous places to launch a canoe or kayak, getting into the water might be an adventurous process! 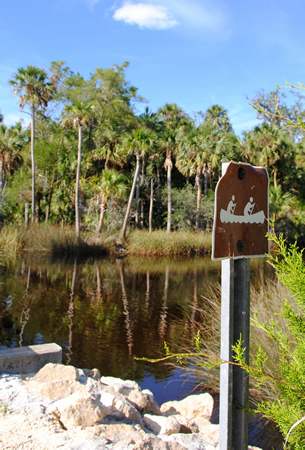 The rather rocky "canoe launch" at Sanders Creek 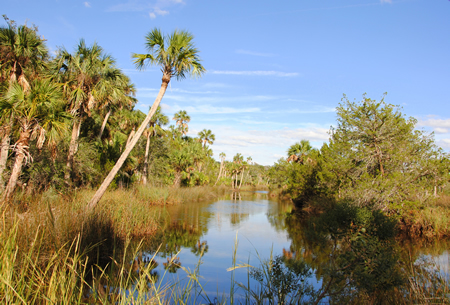 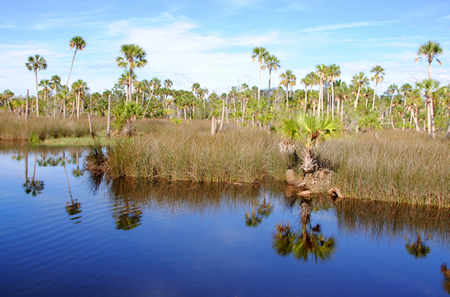 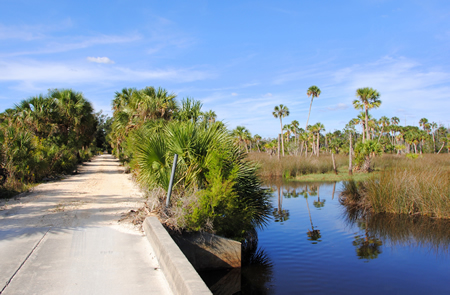 The official Dixie Mainline Trail ends at its intersection with Hwy 357. Turning left onto this highway will bring you to Shired Island (pronounced share-ed, BTW). The county park and campground at Shired Island is incredibly popular with locals during the summer, and is typically the opposite of desolate. However, the fact that Hurricane Hermine had done a number on the park's few facilities combined with the fact that my mom and I were there on a Friday in October meant that it was desolate indeed. 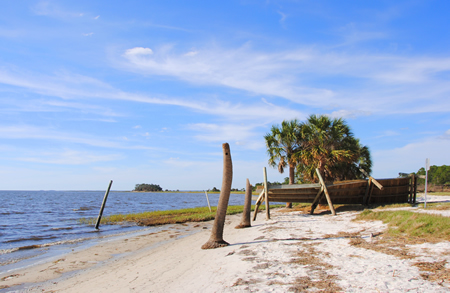 The dock at Shired Island was destroyed by Hurricane Hermine, as were several of the picnic shelters on the site. There were a couple of headless palm trees as well. 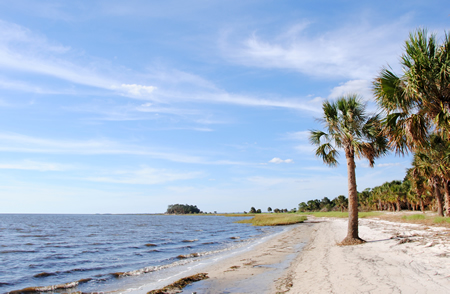 However, for much of the area, you would never guess that it had recently taken the brunt of a hurricane. 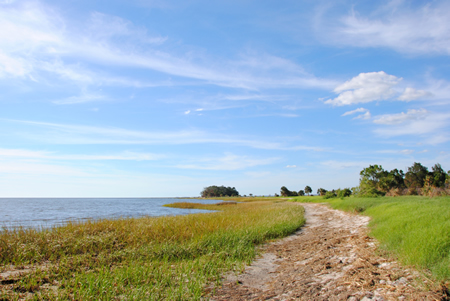 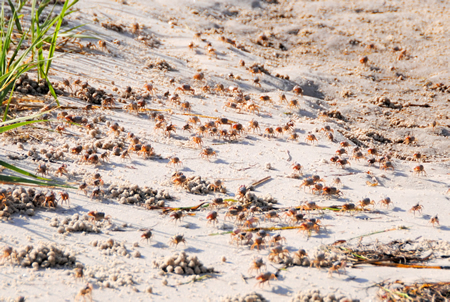 There were fiddler crabs everywhere! 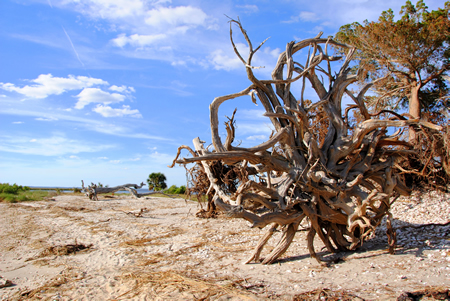 The shell-mound island to the north was covered in driftwood, although much of it clearly predated Hurricane Hermine. 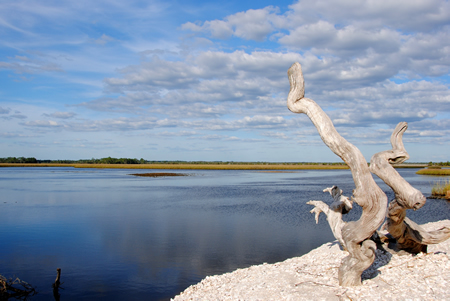 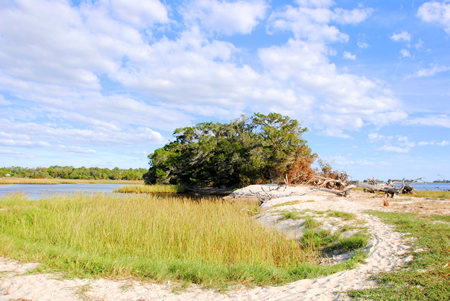 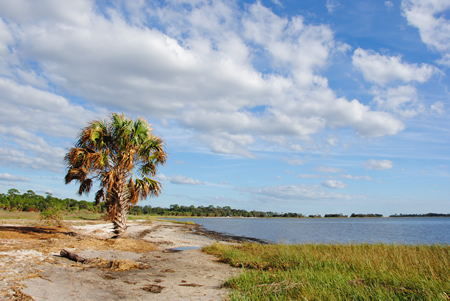 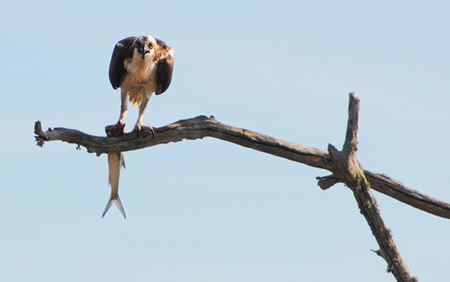 We spied an osprey with its dinner... 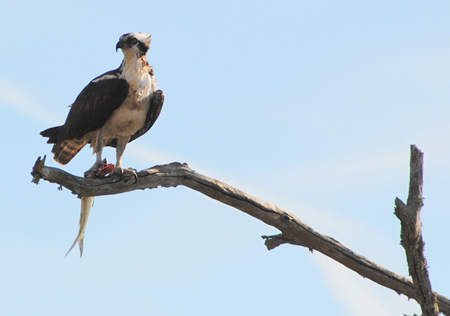